From seabed to high mountain plateau in 550 million years, learn about the geology of Hardangervidda.

From seabed to high mountain plateau

Hardangervidda’s geological history can be traced all the way back to rocks that are older than 1500 million years. Repeated Ice Ages caused glaciers to wear away bedrock so new bedrock was formed by Magma coming up from the mantel below.

Approximately 550 million years ago, the mountain plateau was below sea level. The sea covered the mountain plateau for 100 to 150 million years, through the Cambrian and Ordovician geological periods. Sand and sludge was carried into the sea, and these sediments gradually hardened to form quartzite and phyllite. Phyllite is the predominant rock that makes up the west part of Hardangervidda.

In the north and east sedimented rocks have been worn away, revealing the rock basement.

The greatest upheaval in the plateau’s geological history happened when an subduction zone occurred at the end of the Silurian period. This caused the land to rise by 3000 metres, and its remains form the most noticeable mountain formations and landmarks on Hardangervidda today:

The rocks that were pushed into place from the north-west contained hard, crystalised rocks of which gneiss was the most common.

When the mountain plateau landscape was created

The mountain plateau landscape of Hardangervidda was largely formed by the erosion of mountains and accumulated organic matter.

When the fjords were formed

In the Tertiary period, 50 million years ago, a large land mount formed that had its largest part in the west, and deep fjords were created as a result of the increased glacial erosion.

As the Ice Age continued, great glaciers grew into one enormous icecap that covered all of Scandinavia and Northern Europe. Long warm period separated the ice ages. The last great Ice Age ended approximately 75000 years ago, and glacial ice remained until probably 8500 years ago.

The ice formed the landscape

The ice shaped the landscape and left sedimentary material in the form of moraines and so-called eskers, long gravel ridges which are easily noticeable today. These gravel ridges are found mostly on the central mountain plateau in the east. In the west and north-west are large areas of hard, rocky outcrops without vegetation. These areas were the first that were exposed when the ice melted.

Today’s glaciers are a result of a cold snap that occurred around 1750.

Do you want to learn more about geology? 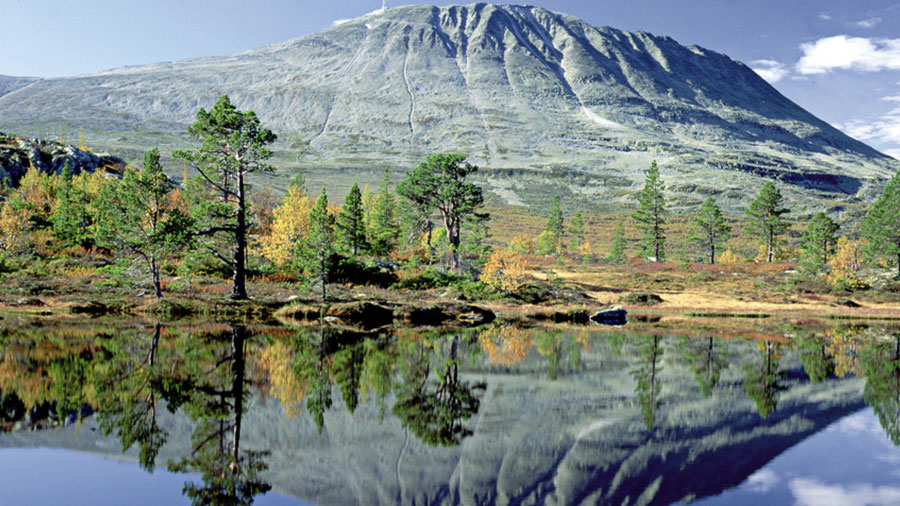